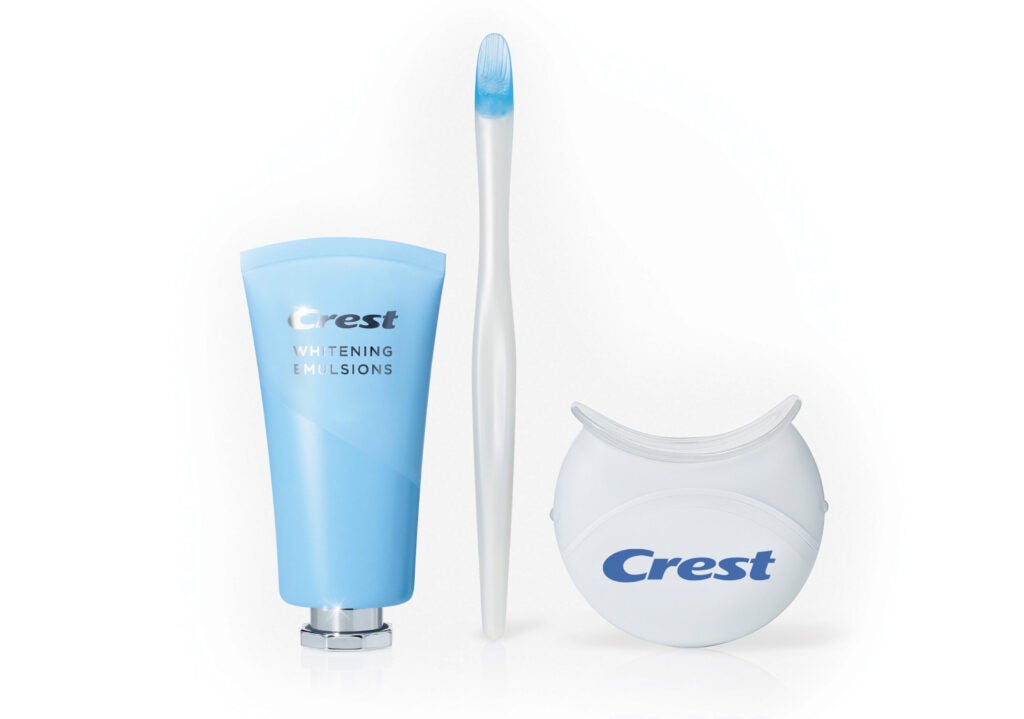 Concentration and contact time are two essential elements of efficacious tooth whitening products, both those that are professionally administered and those that are used at home. The original nightguard vital bleaching technique pioneered by Heywood and Heyman in 1989 used the night guard to provide the contact time and ~3.3% hydrogen peroxide (via 10% carbamide peroxide) as the whitening agent. Over the years, most product improvements focused on using higher concentrations of peroxide and improved delivery devices such as custom trays, strips, and moldable devices. For the most part, the chemistry of the whitening procedures was similar and unchanged, except the concentration of peroxide has increased over the years.

Most whitening compositions consist of hydrogen peroxide, water, a carrier such as glycerin, a thickening agent, and a pH adjusting agent to keep pH in the safe 5-7 range. These structured gels are based on hydrogen bonding to establish the structure and give the gel adhesiveness and viscosity. Hydrogen bonding is the force that links the polar O-H bonds in peroxide and water to the polar groups on the carriers and thickening agents. Both the water and the peroxide participate in the hydrogen bonding to create the gel structure and viscosity. The gels work well; however, the availability of the peroxide is limited because the peroxide is a part of the gel structure. The gels are also not completely hydrated so they pull water out of the teeth during the whitening process resulting in a temporary, non-harmful dehydration of the teeth. 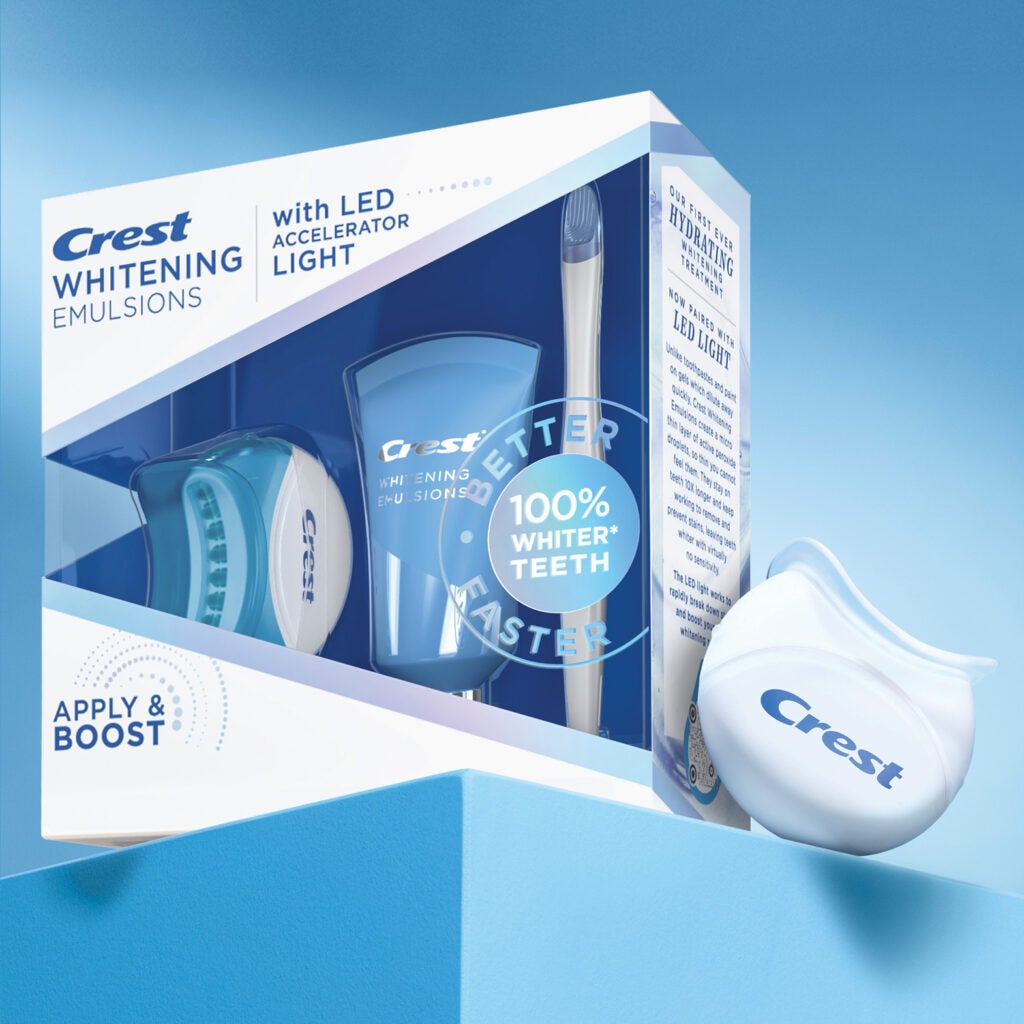 Whitening Emulsions from Crest change the game. Unlike gels which are a single-phase uniform mixture, emulsions consist of two phases – a water + peroxide phase and a carrier phase. The water + peroxide phase exists as microdroplets within the carrier phase. The phases remain separate because they don’t “like” each other. The water + peroxide phase is referred to as the hydrophilic (water-loving) phase and the carrier is referred to as the hydrophobic (water-hating) phase. When this whitening emulsion is applied to the tooth surface, the hydrophilic phase rapidly migrates to the tooth surface providing peroxide that gelling agents do not inhibit. As a result, the peroxide can quickly diffuse to the stains to whiten teeth.

Because the carrier phase is hydrophobic, it acts to protect the microdroplets from diluting away or being decomposed by salivary enzymes. Essentially the hydrophobic phase acts like a strip or tray during the whitening process so that no separate delivery device is needed! Even though you can’t feel it, the composition remains on the teeth for 30 minutes or longer.

Unique emulsion whitening formula is enamel-safe for daily use and stays on your teeth longer to continue whitening long after you apply with no need to rinse, brush or remove.

The researchers at Crest discovered the combination of peroxide + dehydration of teeth contributes significantly to tooth sensitivity during the whitening process. While the sensitivity is not harmful, it is an annoyance.

Here’s the big bonus with the emulsion chemistry — it doesn’t dehydrate the teeth resulting in a highly effective whitening product with virtually no sensitivity!

Whitening with a Great Taste

The researchers at Crest have also figured out how to boost the whitening performance via the specially designed wavelength and intensity of the blue LED light. The key is to wait for the peroxide to reach the stains, THEN use the light. The light activates the stain, making it easier for peroxide to render it colorless. This insight makes the use of the light much easier and more effective. Simply apply the emulsion, wait 30 minutes, and then apply the light for just a few minutes to dramatically boost the whitening performance with virtually no sensitivity. 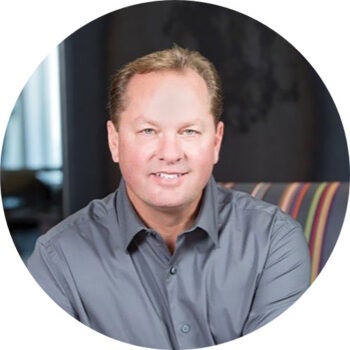 Paul Sagel is a Research Fellow and a member of the prestigious Victor Mills Society at The Procter & Gamble Company. Paul began his career in 1993 after receiving his degree in Chemical Engineering from the University of Cincinnati, where he was awarded the Herman Schneider medal for his academic and professional accomplishments at the Drackett Company.

In his early years at P&G he spent his time revolutionizing how plaque, gingivitis, and tooth color are measured by employing digital imaging and analysis well ahead of its time.

In 1997, he invented Crest Whitestrips, which launched in 2000. In 2007, Paul was awarded the Gordon E. Moore medal by the American Chemistry Society, recognizing him as one of the top scientists in the industry.

Paul is among the most prolific inventors at P&G with more than 100 patents granted and pending, and has been an invited speaker to the USPTO (the United States Patent and Trademark Office) on his innovations. Paul also has written more than 40 publications.

Published in TIPS – September/October 2021. Submitted by Crest Oral B.